A History of success

The Green Party has councillors in every county in our region: Herefordshire, Shropshire, Staffordshire, Warwickshire, the West Midlands county and Worcestershire.

We now have 52 councillors!

This is a big jump from holding just 3 councillors on 3 councils in 2010. 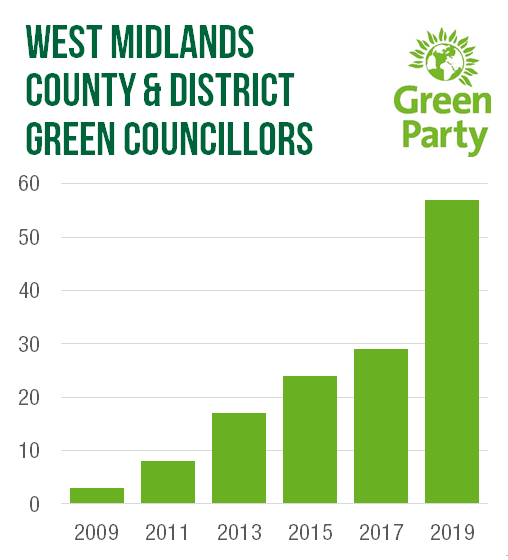 we made further progress:

the Green Party made another leap forward:

the Green Party had continued success:

the Green party won five seats, and held one seat, as well as winning a by-election:

the Green party successfully defended all its seats in the region, and made several new gains:

the Green Party gained a number of seats in the region:

the Green Party celebrated a huge win in Solihull, where the first Solihull Green was catapulted on to the Council, beating the Council's Labour Leader.  Mike came fourth with 9% in 2007 and first with 45% in 2008.  In Herefordshire, Jacqui Tonge gained a seat on Lower Bullingham Parish Council.

the Greens celebrated a gain in Herefordshire where Gerald Dawe won in Hollington ward, near Hereford, in a four-way nail-bighting contest.  Gerald's principal campaign was against the proposed Rotherwas access road, which passes over an ancient archaeological site much loved by local people.  Greens also held seats on Malvern Hills and South Shropshire District Councils.  At the same election, the Green Party saw the election of Parish and Town Councillors in Leominster and Cradley in Herefordshire, Bishop's Castle and Longden in Shopshire, North Staffordshire, Evesham, Pershore, Malvern Wells, the Lickey Hills and Suckley in Worcestershire.